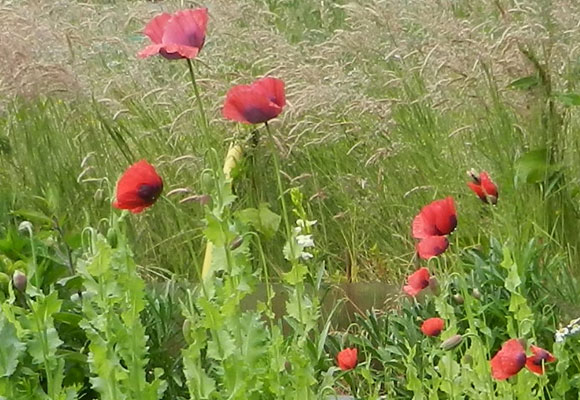 The weather has finally improved and although we are still getting some rainy days, we have also had quite a few very hot days with temperatures in the greenhouse going up well into the 30s.

However, at the back of our plot there is a band of very tall, mature trees which block the sun from one half of our plot until around lunchtime each day. We view this with a mixture of feelings; the lack of sun means that the ground doesn’t dry out as quickly but it also means that the crops in the beds in the shady area take quite a long time to develop. We will have to be careful what we plant in those beds if we want to have decent crops in the future.

The asparagus bed which we planted three years ago is not at all productive and the half which is in the shaded area hardly produced anything at all! We have now decided to prepare one of the sunnier beds over the autumn and plant some new asparagus plants along with the ones which are still producing. Hopefully the year after next will see a good sized crop.

The cutting bed has been great this year with all the spring bulbs flowering well and the poppies we had last year have self seeded all over the bed and the display is amazing.

Last year none of the Brassicas  germinated and the plug plants we bought just ran to seed so we are surprised that this year germination has been good and the seeded brassicas are now the same size as the ones planted from plug plants; think we’ll have a glut of Cauliflowers, Cabbages and Sprouts this year!

I was a bit concerned back in April when I had a senior moment and planted the potatoes too close together! However, having spoken to a few people it seems that is may not make too much of a difference to yield so I left them in place. They have all sprouted and are now in flower so I will know if I have done the right thing when I harvest the first earlies in a couple of weeks time.

Some of our Raspberries failed over the winter so we took the opportunity to plant a summer fruiting variety to compliment the autumn fruiting ones. They are all doing well and fruit has started to develop so we should have a good crop.

You may remember that some nice soul at the allotments decided to steal all our apples last year and we were a bit concerned that they may have caused some damage to the spurs. I think that is the case as we don’t seem to have as many young apples as we did last year. The good news is that both pear trees have lots of small pears already, we have had some drop off but I think that is normal.

When we built the fruit cages we netted them with normal garden netting which began to tear at the end of last year so we have decided to replace it with chicken wire. It is going to be a big job but hopefully if will last for many years so it will be worth it in the long run. We are also hoping it will deter future thieves!

Because the fruit hasn’t been protected the birds managed to get to our Red Currants before we could but our Black Currants and Gooseberries are still on the bushes so we’re hopeful.

The peas are all doing well too and for the first time we have sown Borlotti Beans which also seem to be doing well but are still quite small, not convinced that it is warm enough but we will see.

The Pumpkins and Squashes have not been in for long and are still tiny.