My main tank is 55L and originally came with a hood and light but I prefer the open look so I purchased a couple of sheets of plastic and a light which sits on the edges. It has been running since November 2018 but it took a while cycle so I didn’t add fish until December during which time I had put in a few plants. 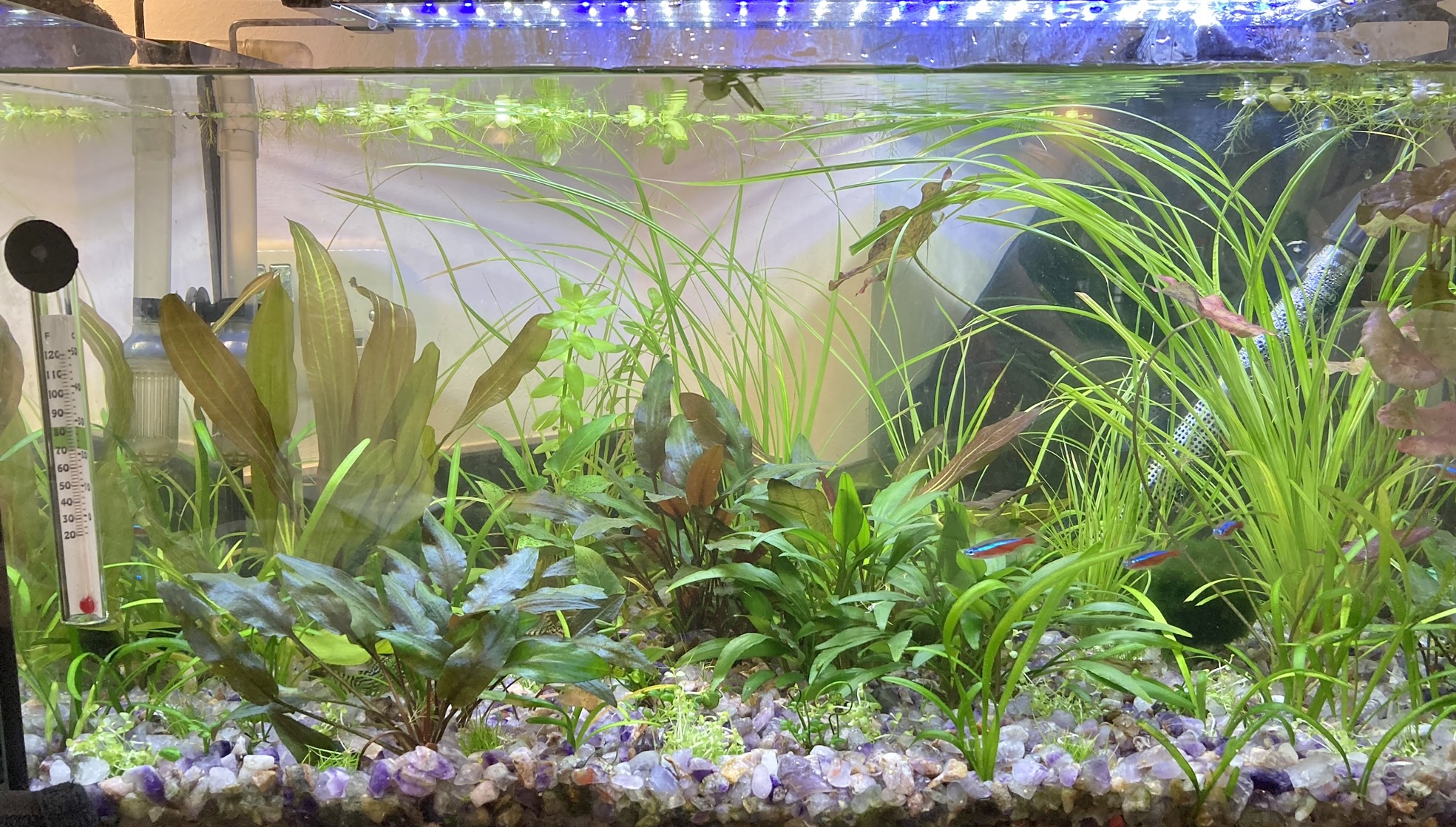 At this point I hadn’t even heard of aquascaping so I just added a layer of gravel and planted a few plants from my local fish store. They did okay but they started doing a lot better once I started feeding regularly and then when I added Co2 they just took off. I didn’t want the bother of a full pressurised Co2 system so I bought JBL ProFlora Bio-CO2 fertiliser system (30 – 80 l) which cost £21.51 from Amazon. You just combine the two powders in lukewarm water, add the supplied tubing and air stone and within a few hours you can see the bubbles begin to rise. My first bottle lasted about two months then I bought the refill for £7.18 so I think it is going to be a very economic way to inject Co2. Since then I have added quite a few more plants and I am attempting to carpet the foreground with a mixture of plants (see below). I needed height at the back so, in the last few weeks, I have planted quite a lot of Cyperus helferi which is fast becoming my favourite plant. There are a number of plants in this tank which I do not know the names of, many are doing well so I will leave them as fillers.

The first fish to go in the tank were three Albino Cory followed a couple of weeks later by six Platys and three snails, out of the six Platys, five were dead the following morning, I left the tank alone for 5-6 weeks then I added three more Platys  and a couple more snails. By April both the Platys and the Corys decided to breed and the tank’s balance was out of control, inevitably after a couple of weeks all the fish were dead.

At this point I decided to invest in an external filter and to keep to fish that bred less easily. The tank took quite a few months to cycle so it was July 2019 before I added the first of the fish, three Otocinclus, followed by five Cardinal Tetras a week late, I then added three Sterbas Corys and a few snails to help with algae control. After another couple of weeks I added my first Betta, a beautiful blue, he was extremely friendly but he only lived a year. Later that year the algae was still quite difficult to control so I added five Amano shrimp to help out and the tank was looking great.

The tank settled down nicely with no issues until the pandemic hit and along with it lockdown. It was at this point that my Amano shrimp decided to all die at the same time so for the next 8-10 weeks the algae just went out of control. I kept the light off for most of the day and blacked out the tank for days at a time to try to control it, it was only with the lifting of lockdown when I was able to buy some more Amano, that it slowly began to disappear. It was at this point that I also began using the Co2 and now there is no algae at all.

I believe that the combination of Co2, a good fertiliser, a handful of shrimp and snails as well as my weekly routine of a 40-50% water change and the recommended dosage of Seachem Prime has meant that this tank is at its best. At the moment my attention is on developing the planting and keeping the wildlife I have happy and healthy.

Thinks I wish I’d known before I built this tank: