Matthew Jones and his fiancée Sue Banks had the value of their new four-bedroom house in Broxbourne, Hertfordshire drop from £305,000 to £50,000 as a result of the damage caused by Japanese Knotweed.

The intruder spread along the brick walls, up through the floor and over skirting boards, the couple who had twins eight months ago have to demolish the house and remove 10 feet of soil from under the building.

Sounds terrible? The fact is Japanese Knotweed is able to creep over high garden fences and take over your property pretty quickly. Even brick walls and concrete roads are no protection against the powerful invader.

What is Japanese Knotweed?

Japanese Knotweed is a strong perennial plant with hollow bamboo-like stems that can reach 3-4 metres in height every growing season. The weed spreads through its crown, rhizome and stem segments, which makes it very difficult to control.

Introduced to Britain in the 19th century as an ornamental plant, Japanese Knotweed has now become a headache for gardeners and property owners throughout the country. Today, the plant is widespread across the UK, “particularly along watercourses and transport routes such as railway lines”, according to Leigh Hunt, Principal Horticultural Advisor, RHS.

Identifying Japanese Knotweed at different times of the year 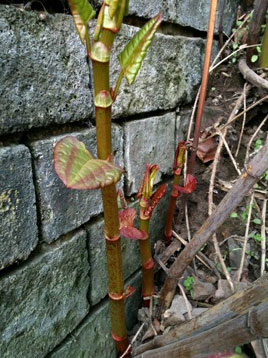 In early spring red buds at the base of the stems begin to develop, followed by the first signs of the red/purple leaves. Throughout springtime the the buds begin to form stems and the leaves grow to around 5cm long; green with red veins.

During the summer the hollow stems, which are now green, grow to up to 3 metres tall and 4-5cm in diameter and look similar to bamboo. The leaves are now deep green, heart shaped and can be as long as 12cm. Small cream/white flowers appear in late summer or early autumn.

As winter progresses the leaves turn yellow and begin to fall from the plant leaving hollow, brown stems which are dead, although the plant will still be alive and the rhizomes beneath the ground will have begun to spread out.

Take a look at the photographs to help identification.

If you happen to notice the stems close to your property, it’s time to take action. Leigh Hunt comments, “If you see it in your garden, it is best to try to eradicate it before it begins to colonise the whole plot. Digging out is rarely successful but if you try this method the remnants should be burnt on site. The most practical solution is to use a strong glyphosate-based weed killer but, even with this, several treatments are usually necessary”.

The best thing to do is hire TP Knotweed help as dealing with the invasive plant on your own is really ineffective. Not only it is barely possible to remove the entire plant from your property, it’s also a problem to dispose of the waste.

Excavation is mostly used when other knotweed control methods are not approved for the site. Keep in mind that excavation and the subsequent waste disposal are quite costly but the method provides instant and complete eradication, which is especially beneficial for construction sites.

As the plant is classified as “controlled waste” under the Environmental Protection Act 1990, it should be disposed of only at licenced landfill sites, or burnt right on site.

The unfortunate “ornamental” invasive species now costs £150 million a year to control. Losing property because of Japanese knotweed is sometimes only one part of the problem when the weed spreads to neighbouring homes bringing damage claims and even greater bills.

Do thorough research before buying property and don’t let the weed grow on its own if you happen to notice it nearby.