Other photographs:
Back Garden
Front Garden

In June 2015 I moved from my four bedroomed, modern detached house, home for 16 years, to a three bedroomed cottage in a small village in Cheshire. I have dreamed for most of my adult life of a home in the countryside and after many false starts I finally managed to fulfil my dream.

The new house is called Dove Cottage and is, in fact, a good, solid, three bedroomed house with small front and back gardens, there is a small shop a couple of minutes walk away next door to a pub which, hopefully, will be reopened shortly.

The orientation of the garden was very important when I was looking for my new home and Dove Cottage has it just right. The side of the house is practically facing south which means that the front garden is sunny from early morning through to late afternoon and the back garden also has the sun in the afternoon then through to late evening. Unfortunately the house was empty for a year before I moved in and the garden had been allowed to become overgrown so there is quite a lot of work required to get it in shape. The house was covered in ivy which was making its way into the roof through the eaves so I have had most of it removed. I have kept two columns of Hedera and some of the Boston Ivy which I will keep under control at a height which can be easily managed. This will give additional shelter for the birds and some, much needed, autumn colour.

Currently I don’t have an actual plan for the gardens but that will come in time. For now the plan for the walled back garden is to clear out a number of large, diseased shrubs and prune back others which have outgrown their position. The ivy taking over the back garden will also be trimmed back or removed. There is a large, curved, raised bed dividing up the back garden which I like but is currently over-run by euonymous, vinca and an unknown grass. I will cut-back as much as I can to see what the soil is like but I suspect the whole bed will need to be cleared and refilled with new soil. The path leading around the back of the raised bed has some interesting plants growing through it which I will try to keep if I can. There is another raised bed built low against the surrounding brick wall which is so full I can’t really see what is there so I will be pruning back most of the planting until I can make out the outline of the bed.

The front garden is mainly bordered by a hawthorn hedge with a very tall Leylandii hedge on the border between my neighbours garden. My neighbour is in agreement with me that the Leylandii hedge needs to go so that is a task for the future. The hawthorn hedge is in quite good condition but it was back-planted with a variegated euonymous which had begun to grow through the hedge, killing off parts of it. The first job I did was to cut back the euonymous and pull it out from the hawthorn which has, already, begun to recover nicely. Another issue with the hedge is that part of it was damaged when a car ran into it! The gap was replanted with hawthorn saplings but with the euonymous growing nearby it wasn’t taking very well. Now the area has been cleared I am hoping the saplings will soon grow to fill the gap.

I am also concerned over the number of trees in the gardens. I feel they are too big for the area and will, in time, block all light from the gardens and eventually impact foundations and drains, therefore I have asked for permission to remove some of them. I will replant the areas with shrubs which can be easily maintained and the size kept in check.

Here are the first photographs I took during my first week in the house.

During July I managed to do some work to the gardens, cutting back most of the large, old shrubs. During September and early October the trees were taken down and the hedge taken out. With a lot of help from Steve the beds were cleared ready to be planted. Here are the aerial views of both gardens taken during July and October.

As the photographs show the lawn in the front garden is in need of a lot of TLC. Before I moved in the grass had been allowed to grow a couple of feet high, it was strimmed down but left a very dry, brown lawn which is very gradually recovering. The recent rain has helped but I need to embark on a programme of repair and maintenance. I will be following my own Lawn Care Calendar and Lawn Care Guide over the coming months, if it doesn’t recover I will either re-seed or lay new turf. The edges of the lawn close to where the shrubs were planted are now dead so I will have to decide whether to re-seed those areas or to cut them out, reducing the size of the lawn.

My old house had three large lawns so I employed someone to look after it for me but as this is a small space I intend to do the work myself. Because I haven’t had to look after a lawn for quite a number of years I have had to buy all new equipment. The first thing I bought was a manual hand push mower from B&Q, at just £37 I thought it was great value and sufficient for such a small lawn. A hollow tine aerator and a scarifier are essential if I am to rejuvenate the lawn and an edging knife and edging shears will keep the edges sharp and neat.

It is not the ideal time of year to be dealing with the lawn but I hope to hollow tine and scarify the area in the next couple of weeks then during August I will feed with a nitrogen-rich ferti­liser and tidy up the edges. During October I will decide whether to persevere with the lawn, if so, I will aerate and scarify if needed and add a top-dressing and an autumn feed and weed treatment. If I decide to re-seed or relay the turf I will do this during October.

As part of the improvements on the house I had the builder install outside taps at both the front and back of the house to make watering easier. For the back garden I already had a spiral hose which I find so much better than using a normal hose so I decided I wanted another spiral hose for the front garden.

I did some searching on the internet and came across a Claber Spiral Kit which extends to 10 metres and comes with a threaded tap connector, two automatic couplings (one with Aquastop), spray nozzle and wall bracket with screws and plugs to hang the hose. I ordered it from Swallow Aquatics for £27.99 (normally £39.99) and it was delivered within a couple of days. I hadn’t come across Claber before but the hose is just as good as more expensive brands and it was very easy to attach the couplings and begin using it and the length is all I need for my small front garden. 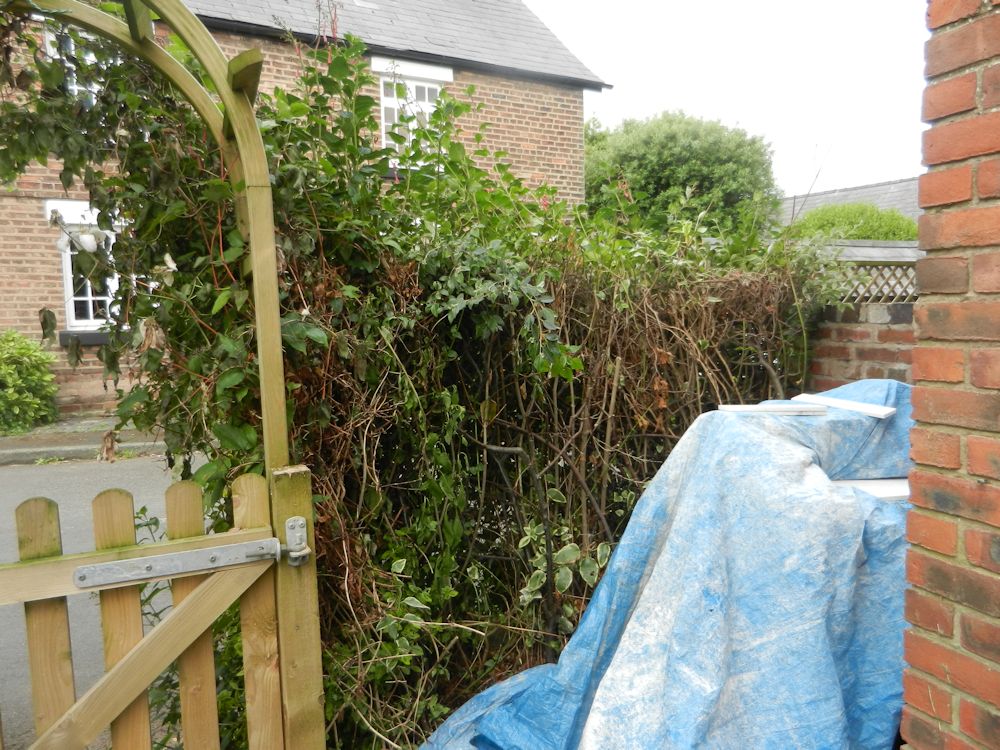 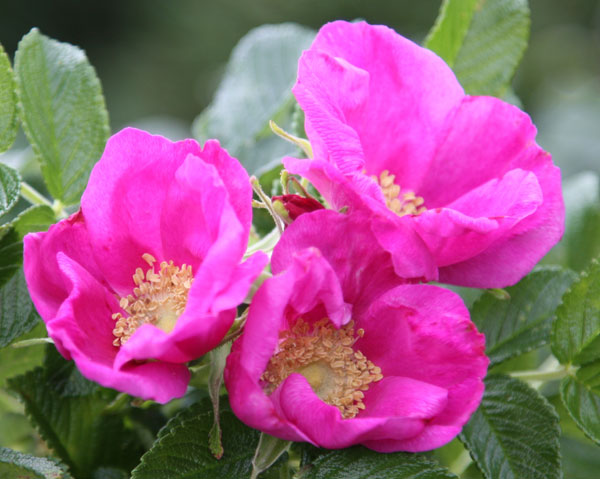 At the side of the house next to the front gate was a very tatty, overgrown “hedge” which I had tidied up when I first moved in. However, it soon became clear that the hedge would not easily be tamed so I asked Steve to remove it.

I have decided to plant a new hedge with Rosa rugosa ‘Rubra’ from which will grow to about 1.5 metres; just the right height for the area. I will plant five plants which should fill the gap within a couple of years. This rose flowers from July to September with bright pink, open flowers which are followed by orange / red hips to take the interest well into the Autumn, and even Winter, months.

Here is a selection of photographs taken mid October after the trees and hedge were removed and after clearing but before planting.

The hedging plants are now in place, here are the photographs:

Most of November was spent finishing off the tidying and building the new greenhouse.

The greenhouse took a lot longer to build than I expected but I am very pleased with the quality of it and, although it is small, I am sure I will make good use of it. Currently it is being used to over-winter a couple of tender plants but come spring I will begin early sowings of vegetables and sweet peas for the allotment.

There is a small area near the back patio which was very overgrown and has now been cleared and it is looking much better. It contains a rather oddly shaped camellia which I shall leave to flower then prune into a nicer shape to develop over the years.

The final thing for now is the addition of camomile plants to the side of the new rose hedge. I had a small area of camomile at the old house and took some cuttings before I left. The cuttings had been in small pots for nearly a year so I thought it was about time they were planted out. I am hoping that they will spread towards to path so they release their scent as I walk along it. I think I will have to buy additional plants for the other side of the path to finish it off.

By April 2016 the gardens were beginning to show some colour, starting with the Spring Flowering Bulbs. See my separate post for details.

I have lifted the old lawn at the front of the house and have sown Trifolium repens (white clover) which I am hoping will form a thick, green, no-maintenance lawn. I have also planted a number of herbaceous perennials in the back border of the back garden. They are: Phlox paniculata ‘Bright Eyes’, Phlox paniculata ‘Blue Paradise’, Phlox paniculata ‘Mount Fuji’, Delphinium ‘Guinevere’, Delphinium ‘Dark Blue Black Bee’, Geranium ‘Rozanne’, Geranium Bloody Cranesbill, Anemone × hybrida ‘Pretty Lady Susan’, Clematis macropelata ‘Westleton’, Digitalis purpurea ‘Dalmatian White’ and Clematis montana ‘Warwickshire Rose’. I’m looking forward to seeing everything in flower but it may be next year before I get the full affect.

Here are some photographs from March and April: