Choose an open, sunny site with good, free draining soil. Dig over the soil in early winter and incorporate compost, firm well before planting and add a general fertiliser. Keep the ground weed-free and water when the weather is dry feeding occasionally.

Onions can be grown from Sets or from Seed.

For an August or September crop sow seed late February to early April when the ground is workable, for an earlier crop sow in mid August. Sow under glass in January, harden off in March and transplant outdoors in April

Onion sets are immature bulbs which have been specially grown for planting and tend to be easier and safer to grow than seed but they are much more expensive. You can also buy heat-treated sets which prevents bolting (running to seed).

Break off any flower stems as they appear and stop watering once the onions have swollen, pull back the earth to expose the bulb surface to the sun.

Onions can be harvested once the foliage has turned yellow and topples over, leave them for two weeks then carefully lift; this is best done in dry weather.

Onions to be stored should be dried by spreading them out in trays then store in a cool, well-lit place. They should keep until late Spring. 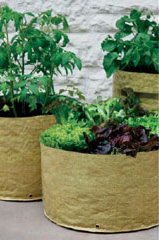 Today I have finally planted out my Onions and Garlic. I have never grown onions or garlic before so it is a bit of an experiment for me. I will have to watch out for frost over the next few weeks but as long as I protect them they should be ok.

Autumn is a very busy time of the year for gardeners. As the weather becomes colder and wetter and most plants in the […]