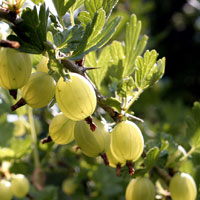 A couple of years ago I bought a red gooseberry bush.

Last summer, its first proper season, it produced about six lovely sweet gooseberries, well I think they were sweet because just when I thought they’d be ready to eat the blackbirds ate all six in one sitting. I was actually watching it from my office window but couldn’t get down quickly enough to stop it.

This year the bush was covered in them; well about 30. On Friday I thought “I’ll get out there this weekend and pick them before the birds get them”. You guessed it, I came home on Monday morning and there wasn’t a single one left.

I hate netting plants as they look so ugly, but next year I’m taking no chances!

I also wanted to take a photograph of a nice plump, red gooseberry for my blog but missed that opportunity too, hence the green gooseberry photo.

The message of the day; if your gooseberries are still on the bush, pick them now.