When we moved in to this house in 1999 it was brand new and the builders had planted up a small flower bed in the front garden. The bed consisted of a tall, slim conifer and a prostrate conifer of some sort.

The first plants to be planted in the bed by me were Dahlias which did really well for a number of years without me having to dig them up each year but after a few years they began to fail. All the Dahlias died off years ago and the bed became more of a “mixed border” and eventually became overgrown and untidy.

So, this year I decided it had to go. I called in Damien Crook of DCO Gardens, St Helens who removed all of the old plants, including the conifers, made the bed bigger, dug in some new compost and added a thick layer of mulch; leaving it ready for me to plant-up.

Here are the before and after photographs: 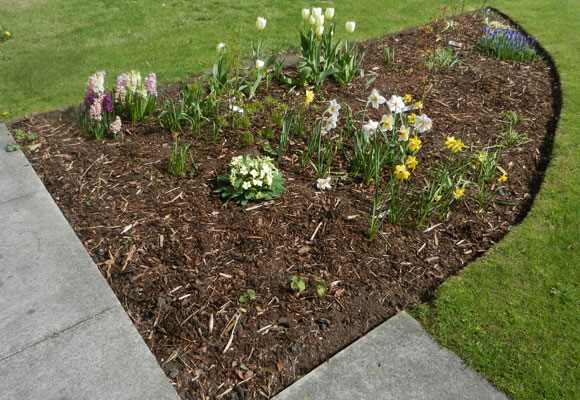 My idea for the new bed is simplicity so I am going to plant just three small growing Acers; if they look to be getting too large for the area I will prune them to keep them in check.

To complete the bed I have also planted some woodland plants and hope that the shade from the Acer will make them feel at home (again from Crocus.co.uk, they are Hepatica ‘Forest Blue’, Hepatica ‘Forest Red’, Primula vulgaris (our native primrose) and Convallaria majalis (lily-of-the-valley). I am hoping they will spread overtime so I can divide them to get more of these lovely plants :