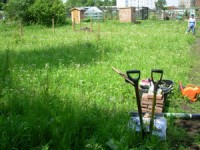 Three weeks ago my brother, Allan, was allocated an allotment after being on the waiting list for just a couple of months.

The allotments are called Ashfiled Allotments and are situated round the corner from our mum’s house in Knotty Ash. It is just a half plot but is more than big enough for what Allan and I want to do. Infact it looks very big when covered in weeds!

Last week we went round and measured the site in preparation to producing a plan; oday we went over to do some weeding. We managed to choose one of the hotest days of the year so it was quite hard work.

The half plot we have is on an area which was derelict, the area was cleared out and top soil bought in to make the plots workable. This means that we have quite good soil of a good depth and that there are not too many really established weeds on the plot. 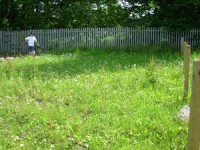 As part of the regeneration the committee planted a hedge of Pyracantha along the line of the newly erected fencing; this is to provide a physical barrier to the outside and to make the fence look a little better. Our first job was to remove as many weeds as possible from the area around the Pyracantha and lay a weed suppressing membrane. Then we put a weedkiller down on about a third of the plot and covered it with heavy duty tarpaulins; these will hopefully help the weeds die off and keep new weeds from coming up before we have a chance to go onto the next phase.

Phase II is to lay bases for a shed, a greenhouse, water butts, compost heaps and the paths around the area. Following this we will go on to prepare the remaining area and build raised beds surrounded by gravel paths. Our aim is to produce a low maintenance plot which is easily managed. The addition of an irrigation system driven from our water butts will help this.

It is going to be a lot of hard work initially but hopefully not too bad for the forthcoming years.

You can see from the photographs how bad it looks now and I’ll keep posting new photos at each milestone so you can see the improvement.