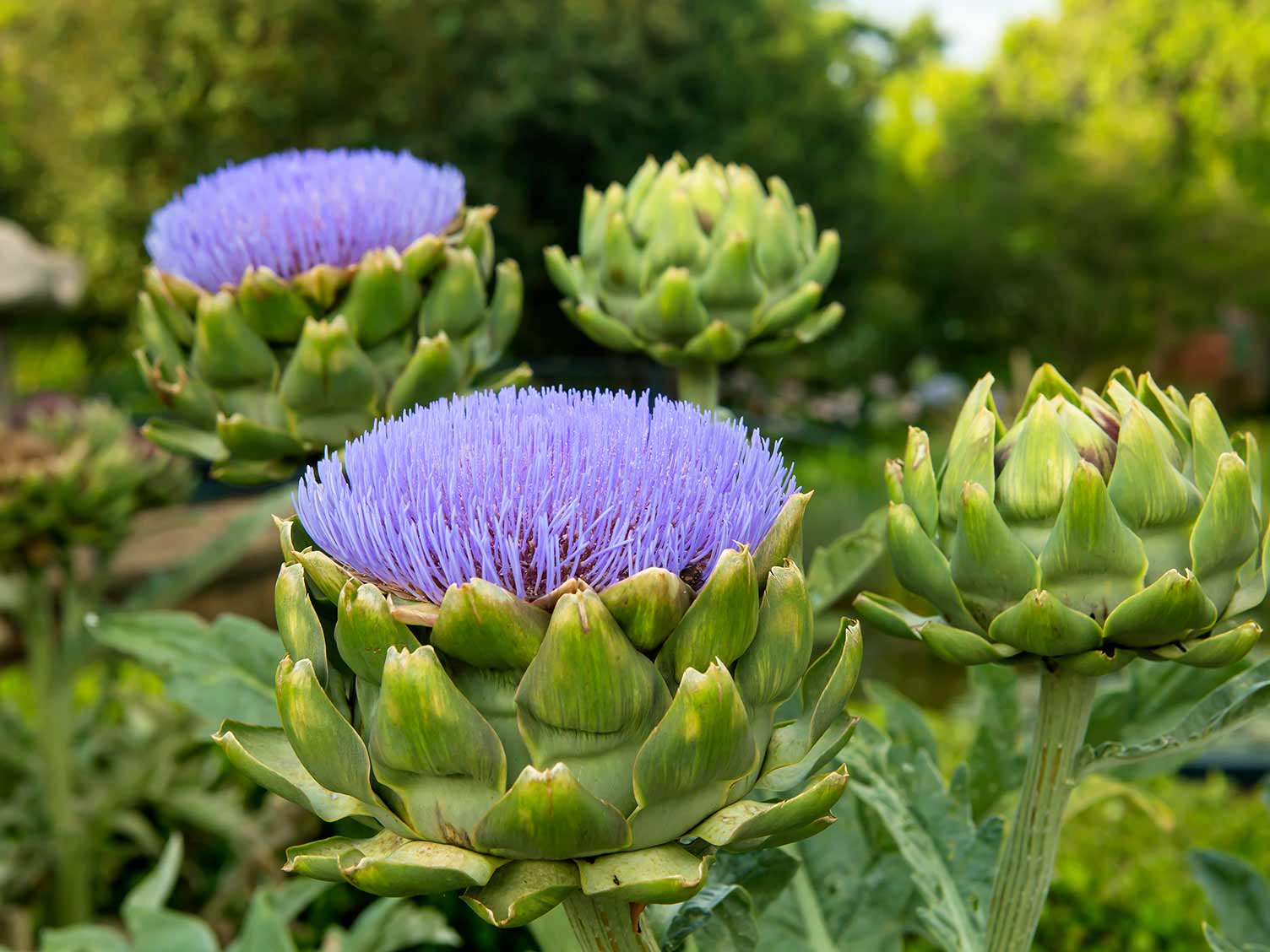 With their large leaves and sturdy rosettes, the artichoke is a distinctive plant. An herbaceous perennial, artichokes are part of the Asteraceae family alongside sunflowers, thistles and dandelions.

These unusual, architectural vegetables are commonly grown for their edible flower buds that are harvested before the flowers open. But they also have ornamental value. Despite looking soft, the arching, silver green leaves can feel prickly. Beyond the foliage you can find thick, fleshy stems. As the flower forms a tender, flavourful bud, known as the artichoke heart also develops. This can be harvested for culinary purposes or left in place. If left in place the plant flowers produce large, purple thistle like flowers with a pleasant aroma.

Growing artichokes adds interest and drama to the garden. Attractive ornamental plants, they also have many culinary qualities.

Also known as green, globe or French artichokes, these resilient plants prefer cooler climates where they happily grow as annuals. In warmer climates you can also grow the plants as short-lived perennial vegetables.

One of the best artichoke cultivars is the Globe cultivar which produces the classic, large round artichoke heads. Green Globe cultivars like fertile, well-draining sunny sites. Once established they are pleasingly drought tolerant.

Other popular cultivars include:

To speed up the process, artichoke plants are commonly sold as either container plants already in their second year of growth or as established root crowns. When selecting your plant or root crown, try to select the healthiest possible specimen. This makes transplanting and growing artichokes a lot easier.

Growing artichokes thrive in fertile, well-draining, pH neutral soil. A sandy, Mediterranean type soil is ideal. Your chosen location should be as light and sunny as possible. Planting in too shady a position can deter flowering.

When selecting your planting site, bear in mind the final size of the plant. Mature artichoke plants can be between 3 and 6 ft tall and around 5 ft wide.

If your soil is poor, take the time to improve it before planting. You can also grow the plants in raised beds or planters.

Unlike many vegetables, growing artichokes don’t fit into a crop rotation system. This means that you can plant them wherever you have room.

Prepare your chosen planting site by digging over the area, working in lots of organic matter as you do so.

Dig a hole large enough to comfortably hold the root ball. Place the plant in the hole, the crown of leaves should sit at soil level. You may need to add or remove some soil before you get the positioning exactly right. When you are happy with the position of the plant, backfill the hole with a mix of organic matter and excavated soil.

Gently firm down the soil and spread a granular, general-purpose fertilizer around the plant. Water well before applying a 2-to-3-inch layer of organic mulch.

If you are planting in pots, fill a large pot, at least 3 ft wide and 1 ft deep, with good quality, well-draining potting soil. Plant as described above and water well.

After planting, mulch the soil around the plants and use a hose to water growing artichokes regularly and deeply. Depending on the amount of rainfall this can be anything from one to three times a week. Regularly watering helps to keep the buds tender and fleshy. It also encourages a strong root system to form. A strong root system is vital for encouraging plants to stand upright and not topple over.

Remember plants growing in pots and planters may require more regular watering than those growing in the ground.

Mulch the soil in the spring with rich homemade compost or well-rotted manure. Apply a balanced vegetable plant food every two weeks during the growing season.

After 3 to 5 years of continuous, healthy growth artichokes develop side shoots. These emerge from the base of the plant. Prune away and discard the shoots. Or, if you want to propagate new artichoke plants, lift the plant and divide the shoots.

Lift and divide the plants every 4 years to keep them vigorous and productive. This is also the easiest way to propagate artichoke plants.

When planting, there are no plants that you should avoid positioning near your artichoke. But be mindful of the size of an artichoke plant. As they grow these develop into large plants that can easily smother nearby smaller specimens.

Peas make for good companion plants because they add nitrogen to the soil. Growing artichokes thrive on nitrogen. Other good companions include: Sunflowers, Cabbage, Tarragon.

You can propagate artichoke plants either by harvesting and sowing seeds or dividing a mature plant.

The easiest way to propagate new plants is by dividing mature plants. This is a far quicker and more reliable way to get new artichoke plants than harvesting and sowing seeds. Division also helps to rejuvenate the original, mature plant.

As growing artichokes matures, they send out offshoots. Allow the offshoots to reach about 8 inches in length before dividing. Use a spade or shovel to dig a circle around the offshoot. Loosen as much of the soil as possible. When you can clearly see the point where the offshoot joins the parent plant, use a spade or sharp knife to cut away the offshoot and some of its roots.

After removing the offshoot, repack the soil around the plant. Plant your offshoot in a prepared position in moist, well-draining soil.

Harvesting and Sowing Seeds. As flowers fade seeds form at the centre of the flower, much like a dandelion head.

Allow the seeds to mature before harvesting. Keep the largest seeds, these should feel hard when squeezed between the fingers. Allow the seeds to dry out in a cool, dry location before storing in a labelled paper envelope or air tight container, such as a Kitchen Storage Mason Jar.

Be warned, if you are saving seeds from plants growing in the garden, they may not grow true to type. If you want an exact replica purchase seed produced under controlled conditions.

Start the seeds undercover at least 8 weeks before the last predicted frost date. Fill trays or pots with moist potting soil. Scatter the seeds along the top of the potting medium before covering with a thin layer of soil. Don’t plant the seeds too deeply, this can hamper germination. Place the trays in a warm, light position.

Following germination, continue to grow seedlings in a warm, light position. Regularly moisten the soil, being careful not to disturb the seedlings. When the seedlings are large enough to handle, transplant them into individual 4-inch pots.

Don’t wait until the last frost date has passed before hardening off the seedlings. The plants need to experience a slight chill before flower buds can set.

You can also sow the seeds directly into their final position in either March or April, depending on where you are growing artichokes. Directly sow 2 to 3 seeds in a shallow hole. Space the seed groups roughly 12 inches apart. Following germination, when they are large enough to handle, thin out the seedlings. If all 3 seedlings have germinated, pick out the weakest two, allowing only the strongest to remain. The seedlings can be thinned out for a second time a few weeks later to a spacing of 2 ft.

Growing artichokes is a pleasantly low maintenance practice. If planted in a favourable position and correctly cared for disease and illness is rarely a problem.

Botrytis, or grey mould, can affect leaves and flower bracts. A nasty fungus which targets damaged or stressed plants, botrytis can cause leaves to turn brown and then grey. Lift and destroy affected leaves.

A number of pests, such as young earwigs, can also target growing artichokes. While the pests create holes in the shoots the damage is largely cosmetic and unlikely to seriously harm a healthy plant.

Slugs can be problematic in damp weather when leaves are young and tender.

Aphids also like to target the foliage of the plants. Regularly check the plants for signs of infestation. Wash pests away with a blast from a hose. Persistent infestations can be treated with an application of homemade insecticidal soap.

Finally, the small larvae of the artichoke plume moth can target the buds. Should you notice any signs of infestation use an insecticide to treat the issue.

If you are growing artichokes as perennials, in the first year, allow the plants to grow without removing the flowerheads. In the second year, allow heads to develop before harvesting.

In ideal conditions plants produce buds periodically throughout the year. But in most areas’ buds form in early summer.

The central bud, also known as the terminal bud, matures first. Harvest this as soon as it reaches 3 inches in diameter. Harvest the bud while the bracts are still tightly folded together and it feels firm. Use a scissors to cut 1 to 3 inches of the stem along with the bud. This makes it easier to handle.

After harvesting the central bud, the side shoots begin to produce smaller buds. Again, these can be harvested when firm again 1-to-3-inch diameter. Small buds can be tender and flavourful.

Raw artichokes rarely store well and should be used as soon after harvest as possible. Cooked vegetables can be stored in a refrigerator for several days.

These tall, arching thistle like plants are pleasingly easy to grow and add interest to flower beds, borders and vegetable gardens. If you don’t want to eat the vegetables it is worth growing artichokes purely for their ornamental interest. Why not add a couple of artichoke plants to your garden this summer?