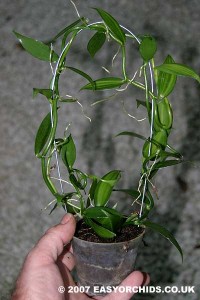 I have just ordered a Vanilla Orchid  (Vanilla planifolia) which is the orchid that produces vanilla pods used in cooking.

This Orchid has thick, fleshy stems and small, greenish flowers which, once pollinated, produce the popular vanilla pods which can be dried and cured to produce the vanilla we know and love.

The flowers themselves don’t have any particular scent and I think I’m going to have to hand-pollinate it to get it to produce the pods but I’m sure it will be quite an impressive plant once established.

The Vanilla Orchid in the Palm House at Kew flowers every year and we hand-pollinate it in order to produce pods.

They don’t need any particular care except to provice a moss pole for it to cling to and to follow the usual care regime as for the common Phalaenopsis, or moth, orchid.

The photograph is courtesy of EasyOrchids.co.uk.