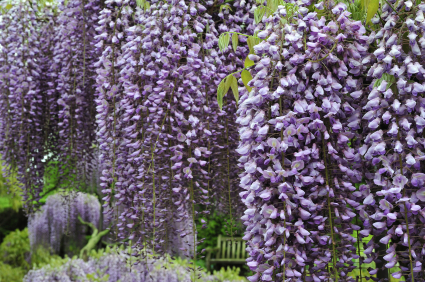 Wisteria is a wonderful, colourful climber which is very easy to grow and has hanging, fragrant clusters of flowers during May and June

Ideally Wisteria should be grown against a wall or fence with a sturdy support system in place. However, it can be grown as a tree or shrub if pruned correctly.

There are two main species of Wisteria; W. floribunda or Japanese Wisteria and W. sinensis or Chinese Wisteria.

Wisteria floribunda flowers in May and June with clusters of flowers reaching up to 46cm (18ins) in length. The flowers range in colour from white through pink to shades of blue and appear at the same time as the leaves begin to develop.

Wisteria sinensis flowers mainly during May and the clusters of flowers are slightly smaller at up to 31cm (12ins). They tend to be either white or lilac and the flowers open all at once before the leave appear.

Plant your Wisteria in a sunny, well drained position, add manure or compost to the planting hole to give it a good start and water it in well and keep well watered until established. Once established it will thrive on a certain amount of neglect so don’t water or fertilise it unless it is looking sorry for itself in which case a small amount of rose fertiliser during late winter should perk it up.

Winter Pruning – Between October and mid March cut back this season’s growth to two or three buds from the base. Cut at an angle just above the bud. This will encourage the development of spurs which carry the flowers in spring.

Summer Pruning – Between late June and Mid August cut back the long vigorous shoots that have been produced during late spring and early summer. Cut just above a couple of buds from the base. If the plant is young and still being trained, select some of the stronger shoots to tie into the frame and cut back to this framework.